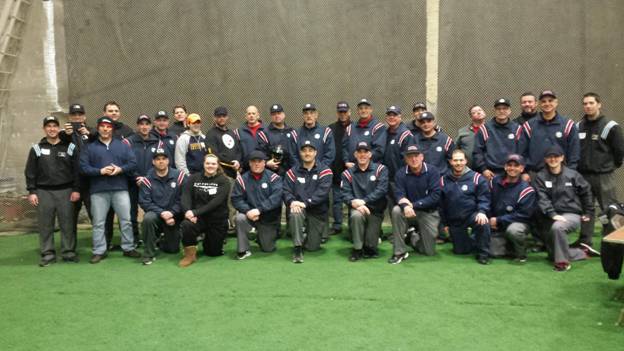 Over 50 umpires from across New York State attended the clinic held on January 9, 2016. This year’s staff was led by MLB instructors Rob Drake (#30), Chris Segal (#96) and Ben May (#97). Supporting them were former minor league umpires Matt Arcovio, Ryan Bealo and Andy Draper.

Attendees trained for an entire day which included plate and base mechanics and game management techniques. All attendees had their plate work in the batting cages videotaped for future training and reference.

The clinic again this year partnered with Umps Care to raise money in support of MLB Umpire charities outreach effort. Through donations and raffles a total of $450.00 was collected.

Please order Certificates of Liability with the following procedure:

The NFHS Baseball Rules Committee and the NFHS Board of Directors believes there are areas of the game of interscholastic baseball that need to be addressed and given special attention. These areas of concern are often cyclical, some areas need more attention than others, and that is why they might appear in the rules book for consecutive editions. These concerns are identified as “Points of Emphasis.” For the 2016 high school baseball season, attention is being called to: intermediate penalties/restriction to the bench/dugout, proper catcher’s equipment, and sportsmanship-celebrations around or near home plate. When a topic is included in the Points of Emphasis, these topics are important enough to reinforce throughout the academic year because they are not being given the proper attention.

The officers for the coming 2 years were elected on October 3, 2016.

Warren Bumpus from the Syracuse chapter has been chosen from the pool of applicants as the winner of the 2015 Tony DeVivo Umpire of the Year Award.